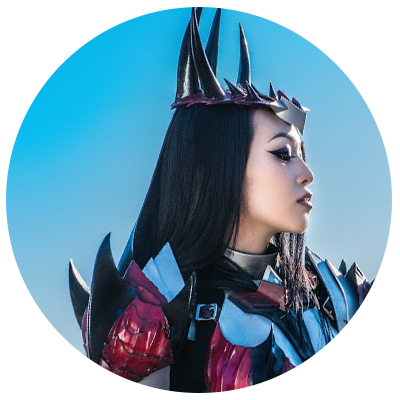 Linda Le (a.k.a. VampyBitMe) grew up in Oklahoma before moving to California where was discovered by Kotobukiya and Danny Choo after being featured in OTACOOL 2. Since then her costumes have been a worldwide success! She has been featured on Marvel.com and CNN’s, “24 Hours in the Life of a Worldwide Cosplayer,” as well as partnering with Capcom, Bandai, DC, and various game companies in order to bring characters to life through cosplay. She also works part-time for the Japanese company Banpresto World Figure Colosseum as the official marketing rep for One Piece and Dragon Ball Z figures. Linda continues to travel the world, talking about armor making, building  Gunpla, and creating new artwork. She loves meeting passionate people and enjoys streaming her passions on Twitch. Recently Linda has cosplayed for Monster Hunter World Iceborne, Genshin Impact, and Blade & Soul, as well as hosted various game debuts. She loves meeting passionate people and streaming her passions on Twitch, and believes anyone can do what they love, as long as they are true to themselves.

This year Linda will be hosting panels and workshops on cosplay and building Gunpla models!

Thank you to everyone who attended Virtual FanimeCon 2021! We definitely felt all the love and community that all of you bring to con each and every year! We're excited to announce that FanimeCon 2022 Registration is Open! https://fani.mobi/3wjA3zq

Thank you to all the attendees that attended Virtual FanimeCon 2021 and all of the many volunteers that made it happen! Until next year! https://fani.mobi/3vBy7ln

Retweet on TwitterFanimeCon Retweeted
May 31, 2021

We still got a bit of Skullgirls action on our channel, then Jackbox next!
https://www.twitch.tv/fanimecon